From Athleisure to Artisans, 5 Things to Watch For at Pitti Uomo This Week 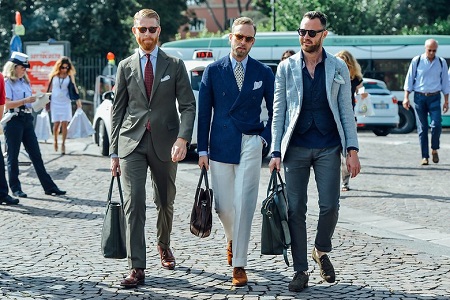 From Athleisure to Artisans, 5 Things to Watch For at Pitti Uomo This Week

This week, from January 12 to 15, Pitti Uomo returns to the Fortezza da Basso in Florence, Italy, bringing with it a slew of well-dressed gents and noteworthy events. The selection of guest designers Juun.J, Marco de Vincenzo, and Yosuke Aizawa, who will present a project from Adidas Originals x White Mountaineering, and the announcement of the Generation(s) theme exploring the relationship between nostalgia and the new have already created a substantial buzz, but several new and expanded programs announced today gave menswear fanatics plenty more to look forward to at the four-day festival. Here, we outline the five can’t-miss happenings set for this week’s affair.

1. The International Woolmark Prize menswear finals arrive in Florence.
For the first time ever, the International Woolmark Prize finals for menswear were held in Florence. Six contestants from six different regions—Siki Im from the United States, Munsoo Kwon from South Korea, Agi & Sam from the British Isles, Jonathan Christopher from the Netherlands, P.Johnson from Australia, and Suketdhir Dhir from India—presented collections utilizing Australian merino in the Villa Favard. Today, Suketdhir Dhir was announced as the winner and will receive AU$100,000, as well as the chance for placements in Harvey Nichols, 10 Corso Como, Saks Fifth Avenue, MatchesFashion.com, and other international retailers.

3. Couture craftsmanship takes center stage.
If there was any question that craft is having a resurgence, Pitti Uomo’s new showcase, Make, should settle it. The event promises exclusively handmade goods from 40 international brands, spotlighting new techniques and ideas in the world of artisanal production.

4. A showcase of made-in-Africa products will return for the second season.
Following the success of last season’s Constellation Africa showcase, Pitti Uomo is bringing back the project in partnership with the International Trade Centre’s Ethical Fashion Initiative. A collection of goods made throughout the continent will be on display for buyers, press, and guests to see.

5. The athleisure event is bigger than ever before.
Proof that athleisure is here to stay: Pitti Uomo’s I Play activewear showcase is the biggest it has ever been, featuring brands like Herschel Supply Co., WeSC, and Puffa. The event has grown so large, it’s now taking over nearly 6,500 square feet of the Cavaniglia Pavilion, making it one of the week’s more spacious events—and without question the one with the most jogger pants.