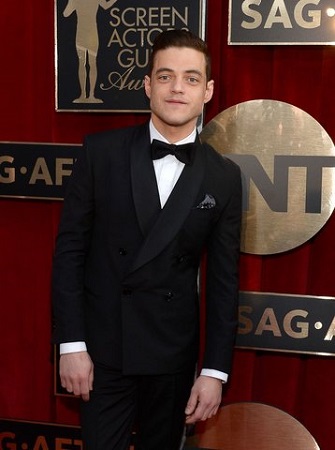 More often than not, it’s the ladies who steal the spotlight on the red carpet, though it seems as though the tables were turned at the Screen Actors Guild Awards tonight. From double-breasted styles to midnight blue suiting, Hollywood’s best-dressed men outshone the women, stepping out in classic and gentlemanly looks that nudged traditional black-tie dress codes forward.

Leading the pack in double-breasted eveningwear were Mr. Robot star Rami Malek and actor Anthony Mackie. Malek opted for a hint of texture with a satin shawl-collar style from CFDA/Vogue Fashion Fund duo Ovadia & Sons, while Mackie kept things cool in blue Brunello Cucinelli. Also striking a chic blue note were Jon Hamm and O’Shea Jackson, Jr., who was joined by his equally dashing Straight Outta Compton costars.. The most dapper gent of the night? Beasts of No Nation actor Idris Elba, who made the most convincing case for the waistcoat that we’ve seen in years.