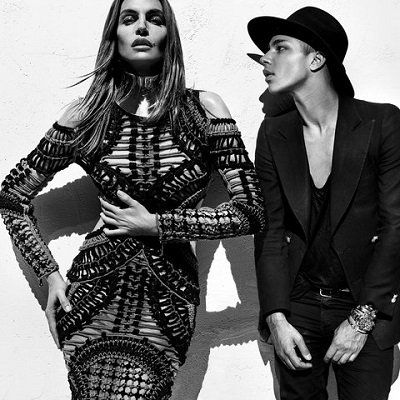 Olivier Rousteing’s #BalmainArmy is in expansion mode. Yes, he already has 2 million troops on Instagram, which says nothing of the mononymous celebrities who wear his clothes and support his vision (Kim, Kanye, Rihanna, Gigi, Kendall, et al.), but Rousteing’s Spring campaign for the house brings a new demographic into the mix: ’90s fashion icons. Shot in black and white by Steven Klein are Cindy Crawford, Naomi Campbell, and Claudia Schiffer posing in the designer’s body-conscious and ruffled Spring creations.

For the designer, the campaign was a long time coming. Reflecting on his youth in France, he remembered pinning Peter Lindbergh photos and candid backstage snaps of the trio onto his mood boards. “I felt like I was dreaming as I was watching the photo shoot, because I knew it was going to be something iconic that I would never forget,” he said. “You realize working with them, it’s another way than working with the models of today. They know so much about themselves. Their career is so strong. They know their bodies so well. They move at the same time that the camera is moving. Steven also knows them so well, so it was such a good synergy.”

The shoot also provided the three legends some much-appreciated time to catch up. “I loved seeing Cindy and Naomi again. Every time it’s like I’m continuing a conversation from the day before. We have experienced some amazing times together. Cindy and I talked about family life as we had our hair and makeup done, and Naomi, who still has the best body in the business, made us laugh,” recalled Schiffer, with Crawford adding, “I can’t wait to see the pics—[they] will probably give me a little more fashion credibility with my daughter!”

As for how the existing #BalmainArmy will take to the new campaign, chances are you’ll find their reactions plastered across social media within the hour. To those who say that a trio of supes is a departure from Balmain’s standard Generation Y fare, Rousteing is quick to remind, “All the people who love Balmain have this nostalgia of the power of fashion in the ’90s when models were iconic—and this is always what I push. . . . When you love Balmain, you love Cindy, you love Naomi, and you love Claudia. It’s natural because they are iconic, they are powerful, and they are strong—and they make a lot of people love fashion.” Amen to that.

Find exclusive behind-the-scenes images of the campaign shoot above, and a first look at the trio in action below.