French Girls Do Everything Better, Even Instagram (And It’s Because They Don’t Care) 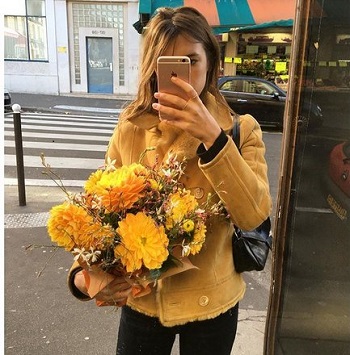 French Girls Do Everything Better, Even Instagram (And It’s Because They Don’t Care)

Selfies. Engagement. Follower ratio. Digital footprint. Previously reserved exclusively for the blogger set, self-marketing terminology has become an essential part of our daily vernacular. Admit it: How many times have you gone somewhere “just for the picture,” or made your friends reenact a fun moment so you could capture it in better lighting? And for those of us who feel kind of awkward posting that new Loewe bag on Instagram, there is now Snapchat, where shameless self-promotion can be subdued via a few cleverly placed emojis! In the moments that we aren’t posting, we are watching (read: stalking), observing, and building a bizarre viral fascination with people we have never met in person. While I understand that this is the name of the game, it occasionally scares me when my New York friends know what color Gucci loafers Chiara Ferragni has in her closet. This is a phenomenon I never really encountered in my years of living in Paris. And so I wondered: Is it just that I never noticed, or is it possible that our social media epidemic somehow bypassed the trend-resilient French, kind of like ’80s fitness-mania and athleisure?

“I would say that the contemporary obsession with social networks is a fairly universal phenomenon, not necessarily linked to a country. We are all on them. Not being on one of them would almost be like living in the margins of society,” says Stéphanie Delpon, cofounder of the Paris creative agency Pictoresq. Although she spends significant time on Instagram looking for the next Parisienne du jour to cast in projects, she maintains a “passive” personal approach to social media. This is a position adopted by many Françaises, who choose to quietly observe rather than throwing themselves in the middle of the attention-seeking circuit. In the moments that these social media ghosts do decide to share the occasional photos, they are most likely to post ambiguous shots, which tend to be intentionally obscured by large shadows, while ours are amplified by Facetune. Speaking of Facetune, very few Parisiennes know of the existence of such applis—applications—mainly because they simply have no use for them. “In France, taking a selfie is rather shameful. It’s fun to do it from time to time with girlfriends, but if a selfie is taken too seriously, it’s really frowned upon. I think this is related to the fact that the French culture seeks more value in the intellectual rather than the physical,” says Julie Palasse, a merchandiser for Alexander McQueen. “I find selfies to be rather decadent,” says Delpon. “All you are really saying is: ‘I spent hours taking a photo of myself from every angle; here’s a photo where I find myself beautiful—now please admire me!’ It’s a bit unnerving, isn’t it?” Well, when you put it that way . . .

And yet, both women unanimously agree that Instagram is a great tool that, if used correctly, can open up many interesting opportunities. Delpon particularly admires girls who have successfully created brand universes through social platforms, citing designer friends Camille de Dampierre (@camillededampierre) and Océane Buret (@o_c_e_e) as examples. She prefers engaging with brand content directly, rather than going through the intermediaries, i.e., fashion bloggers: “I think we are all a bit tired of seeing their sponsored posts.” She also enjoys following more discreet accounts that exhibit the interesting inner worlds of the user. “The girls I follow don’t take selfies; they maintain a certain distance with themselves and do not seek to build a narcissistic showcase. They feature their lifestyle, their friends, their artwork, or images that have attracted their attention—in short, their eye, their vision on the world,” says Delpon, naming Claire Margueritte (@clairelagalere), Jan Scott Melka (@Janmelk), and Alice Pfeiffer (@alicepfeiffer) as a few cool girls to watch. All of them have fun, eclectic profiles that convey a good eye, a blasé attitude, and a penchant for interesting photography with witty captions, to boot. None of them have more than 6,000 followers, possibly because they aren’t really trying. “Being popular on Instagram is like being rich in Monopoly, isn’t it?” Delpon adds. “The coolest French girls are not aiming to be It girls, they do not have 150,000 Instagram followers, and they are not too aware of their image. Instead, they are creative and have many different passions and interests. They are authentic and genuine, and that’s what sets them apart.” It’s interesting how quickly #Goals can shift from being the girl with the perfect morning matcha to being the quirky girl who marches to the beat of her own drum. It’s interesting how quickly #Goals can start feeling that much more attainable.