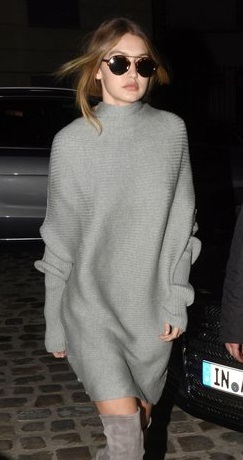 It was just last week that Gwyneth Paltrow showed up to a glamorous event in Austria sporting a sweaterdress by Michael Kors Collection, a cozy take on red carpet style. And leave it to model-of-the-moment Gigi Hadid to up the ante on that idea for cocktail hour.

Unlike the classic body-con styles of seasons past, Hadid’s ribbed tunic-style Designers Remix dress has a flattering, body-skimming silhouette. Besides being a warm and inviting layer in the cold, the dress also coordinates nicely with Hadid’s elephant gray Stuart Weitzman boots, which are proving to be a favorite for the 20-year-old jet-setter. Clearly, Hadid isn’t afraid to put her best (and most chicly clad) foot forward as often as she can.