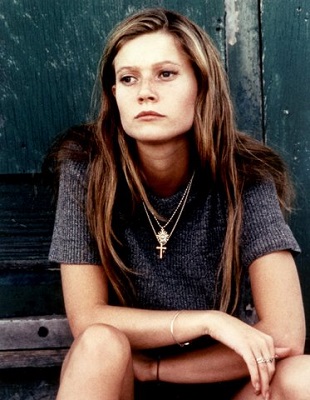 Long before she became a lifestyle guru by way of her website, Goop, espousing the benefits of the Tracy Anderson Method and popularizing catchphrases like “conscious uncoupling,” Gwyneth Paltrow was an up-and-coming actress and paparazzi darling. Bursting onto the ’90s Hollywood scene with her insouciant slouch and gangly elegance, it was her cool blonde beauty—along with her talent—that made her an instant hit.

Indeed, if present-day Gwyneth’s look is distinguished by the equally remarkable skin and foolproof power blowout that have become her signatures, her 20-something self was still deep in an experimental phase—especially when it came to her hair. Tearing through a lineup of early-decade signatures, from extreme side tendrils to floppy knots, she was the poster child for undone It-girl lengths.

The mid-’90s brought films like Emma and Se7en—in which Paltrow starred alongside her soon-to-be boyfriend Brad Pitt—and a slew of quirky updos that made her blonde lengths all the more memorable. Sliding Doors introduced Paltrow to the power of the pixie cut, a look that had her twinning with both Pitt and Paltrow’s dark-haired counterpart, Winona Ryder.

The actress eventually indulged in a brief fling with brunette before reclaiming her golden girl status at the end of the decade. In 1999, Paltrow took home an Academy Award for her role in Shakespeare in Love sporting a sleek, blonde knot at the nape of her swanlike neck—and inspired an entirely new, cultish definition of red carpet minimalism. Here, a look back at her best throwback ’90s beauty moments.