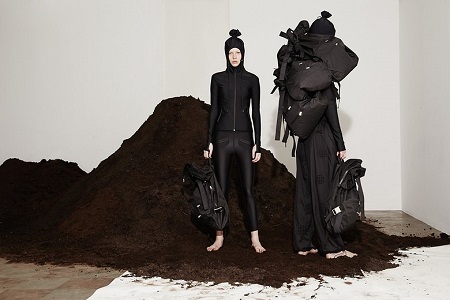 While you might know Björn Borg as one of the world’s greatest tennis players, Swedes also think of him in conjunction with skivvies. For years now he’s been sort of the Calvin Klein of Sweden, and his logoed underthings are fairly ubiquitous. The snow started just before I headed out to the label’s Stockholm Fashion Week presentation, and I was feeling pretty sorry for the models, thinking they’d be standing around in very little at all. But that was not the case. The brand teamed with British menswear designer Craig Green this season, as it begins to add athleisure to its offerings.

Models in cream and black garments—some quilted, others with adjustable ties and removable pockets, accessorized with convertible backpacks—stood on piles of dirt as Green explained that the neutral palette was inspired by the idea of shadows. The designer’s use of piqué fabrics, traditionally found in tennis gear, nodded to the company’s founder, while the circular elements throughout echoed those in Green’s namesake collection, and recalled that of a tennis ball. Borg and Green, it seems, are a pair well matched.

After weeks of subzero Celsius temps here in Sweden, the thermometer and the sun were up as the Fall 2019 season kicked off with Whyred’s womenswear show. Though it was presented in the grand concert hall at Berns, built in 1863, where glamour girls like Marlene Dietrich and the Supremes performed, the show was informed by punk rather than polish. Inspired by the ’80s indie guitar scene in London, which, the show notes explained, came after New Wave and before grunge, creative director Roland Hjort showed his clothes on models who looked like they were coming home from a rocking all-nighter.

Having name-checked Bobby Gillespie as an exemplar, Hjort showed plenty of tweedy menswear pieces, in keeping with fashion’s current fixation with gender fluidity, which were sometimes paired with shiny vinyl. Girlier and very mod minidresses, one in a blue plaid worn with short boots and tights, were intricately pleated. Variations of the pentagram appeared in insets throughout, as well as on the patches that adorned many pieces, including the company’s star coat, first designed 16 years ago and still a best seller.

If Whyred’s show rocked, AltewaiSaome’s rolled to a gentler beat. Japonisme, which appeared in several Pre-Fall collections, Valentino among them, showed up here in kimono details. Softly draped pieces contrasted with the more tailored pants that designers Natalia Altewai and Randa Saome often layered them over.