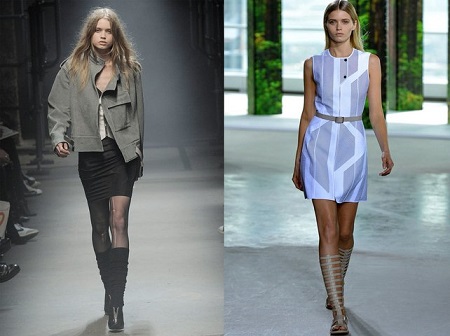 At the start of a new year, change is on everyone’s minds, and fashion thrives on this spirit of reinvention. For the women in front of the camera, a well-timed makeover can take their careers to the next level. Many models take a page out of Linda Evangelista’s book and reinvent their look via new hair color or cut, but only a select few have pulled off the complete 180 in terms of their image. A total redo serves not only to change the immediate aesthetics of a model; it can also change the way they’re perceived by casting directors, the powers that be, and the public at large. The right shift at the right time opens doors, taking a plucky young punk and turning her into a Victoria’s Secret Angel, or giving a girl next door some much needed editorial edge. Take a look at seven of the most interesting model evolutions, and see how these stars have used personal style to keep the industry buzzing. Who knows, it might inspire your own.

Abbey Lee
Arriving on the scene fresh from Melbourne, Abbey Lee was the human embodiment of the industry’s fixation on all things boho. Wide-eyed, with long brown hair and an air of innocence, Lee was fashion’s favorite flower-child face. As she evolved within her career, and as the industry moved on from its bohemian rhapsody, so did Lee’s look, shifting from glamorous, platinum-haired goth during her runway heyday to her current taste for pastel hair and sleek, starlet-worthy gowns.