Since her arrival on the modeling scene in 2014, it’s been apparent that Natalie Westling was something else. The combination of her angelic features, flame red hair, and tomboy attitude made her a favorite of Marc Jacobs, Hedi Slimane, Miuccia Prada, Tom Ford, Phoebe Philo, Nicolas Ghesquière, and nearly every other big-name designer out there, though despite her successes, she prefers to keep a relatively low profile. Her Instagram, which boasts more than 46,000 followers, hasn’t been updated in 10 weeks—basically a lifetime in Internet years—though she continues to be a model-of-the-moment, walking in exclusive shows and booking top campaigns. So what’s Westling been up to in her downtime? Skating.

The Arizona native first picked up a skateboard at age 3. Her dedication to the sport is so extreme that her first two tattoos are emblematic of her passion: Her left arm reads “skate” in graffiti lettering, and on her right there’s a Vans logo. Pretty bold for a model to dedicate herself to a label that thoroughly, but Westling’s no joke when it comes to skateboarding. Her latest modeling coup finds her inking a deal with the iconic skate company to be a brand ambassador for its Sk8-Hi shoe silhouette campaign to celebrate the brands 50th anniversary. Vogue.com caught up with Westling on the occasion of her first Vans lookbook to talk skating, modeling, and that tattoo. 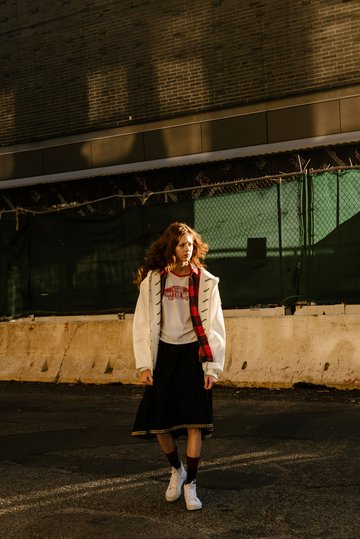