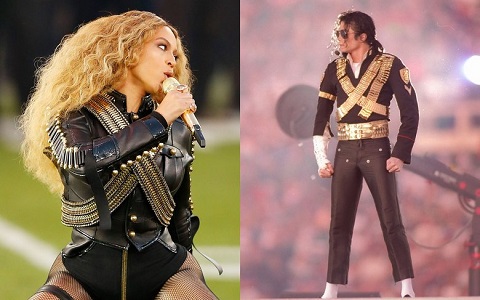 Beyoncé has had quite a weekend. First, she dropped “Formation,” a single with a pointed message and fierce fashion; then she stole the show with her halftime performance at Super Bowl 50. Dazzling onstage in a custom military-inspired look by Dsquared2 (over an Ashton Michael bodysuit), the superstar was clearly paying homage to what Michael Jackson wore when he sang at Super Bowl XXVII, back in 1993. “He is her biggest musical influence,” said Knowles’s stylist Marni Senofonte in an exclusive interview with Vogue.com’s Marjon Carlos.

Headliners Coldplay had said they wanted to “honor past, present, and future” this year. To that end, they invited the Youth Orchestra LA to represent the future, and asked Beyoncé, who had performed in 2013, back to the stage. Past is generally not a word that applies to Beyoncé and her relentlessly forward-thinking vision, but in nodding to the Black Panthers’s kit (via the dancers’ berets and harnesses) and, most directly, Jackson’s Super Bowl performance—said to be one of the most viewed in television history—she honored history while making it.