Taylor Swift Has No Bad Blood With Her A-List Squad 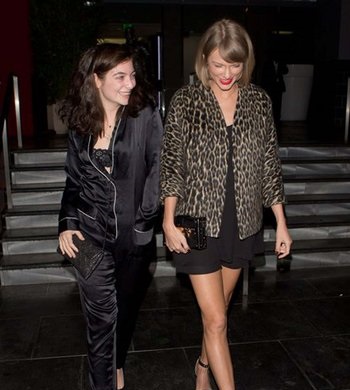 Taylor Swift Has No Bad Blood With Her A-List Squad

While Taylor Swift leads the pack in squad style, the modern-day iteration of the chic celebrity clique owes a little something to Academy Award winner Leonardo DiCaprio, whose perpetual wingmen included Tobey Maguire and Entourage’s Kevin Connolly. But whereas DiCaprio’s crew ran amok in the city back in the day, Swift is using her power posse for good, broadcasting a girl-empowerment message of unity and friendship, all while having fun and picking up some stylish tips from friends whose fashion goals are in league with her own.

After all, within Swift’s army are models Karlie Kloss, Martha Hunt, Lily Aldridge, and Gigi Hadid. And while we’ve spied Swift head to the gym with Kloss or the amusement park with Aldridge; act as surrogate aunt to Aldridge’s daughter, Dixie; and go shopping with Hadid, it’s when she’s bonding with friends from the music and film world that we see her style kick into high gear. A night out with actress Jaime King inspired Swift to debut a dress featuring a subtle shoulder reveal, dinner with Lorde called for leopard print, and who better than Revival singer Selena Gomez to have by your side as you debut a daring bandeau look at the Grammy Awards? Because when you’re Taylor Swift, the posher the posse, the more fun the party.