Why Models Are Actually Hanging Out at a Place Called Modellounge 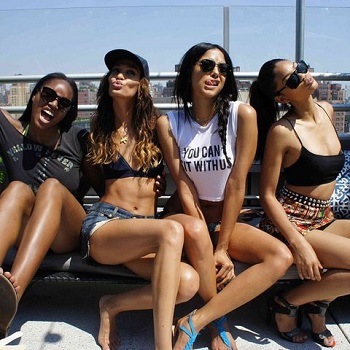 Why Models Are Actually Hanging Out at a Place Called Modellounge

Finding a suitable workspace is an issue that plagues many freelancers, and models, with their castings, fittings, and go-sees, are no different. Coffee shops and restaurants are nice, but they aren’t always the ideal place to catch up on emails or get things done. Enter Modellounge, a Soho House–style members-only club where New York City’s top models can go to relax, recharge, and, perhaps most important, have a moment of privacy. With outside guests and men banned from entering during normal hours, Modellounge offers a break from both gawkers and aggressively flirtatious bros, but that’s only part of the story.

“At this point, it’s much bigger than just having a safe space within the city,” says Modellounge founder Bernard Smith. “Starbucks isn’t the most ideal space for models who need a place to recharge, use a bathroom, or change clothes between appointments. As ground zero for models, not only do we provide a safe haven, we offer models a truly off-duty environment that isn’t demanding, but instead resourceful and rewarding.”

Smith began Modellounge in 2009 with the goal of creating a place where models could unwind between their castings and appointments, inspired by his girlfriend, Joan Smalls’s, search for such spots around NYC. “I conceived this idea to create a workstation where she and her model friends could converge and remain in work mode during the day,” says Smith. “I presumed it would benefit other female fashion models, but wanted to restrict access to models who were working and really in need, so I went exclusively with top agencies.” Though only models from reputable agencies are allowed access, there is no fee involved—allowing for Modellounge’s services to be enjoyed by everyone from established stars like Smalls to the newest fresh face. “We choose not to charge models and agencies because we feel girls should have access no matter their financial situation,” says Smith. Sustained by unique partnerships with well-known brands including Microsoft, Puma, and Beats by Dre, the line between service and commerce is one Smith is keenly aware of. Says Smith, “When we work with brands, we try to create meaningful programs and relationships that benefit our community of models.”

For Smith, it’s all about encouraging a sense of community. “We’re able to offer support through workshops, the Modellounge Card, and other key programming that benefits so many more than just a few models or agencies,” says Smith. Some of the perks are smaller, though no less appealing: The club’s simple black tote has become a street style staple sneaking into slideshows and Instagrams.

With the Modellounge itself a success—the Union Square location is always buzzing with energy—Smith already has his sights on changing the model apartment. “It was a natural progression, as we always have models asking us about temporary housing,” says Smith. “Bringing to life the Modellounge Apt has been a great experience—searching for a property, decorating the interior, and seeing the property in demand. It serves a real purpose, and I’m happy we spent time making sure it was the best possible option out there.” With the apartment and several other projects on the horizon, Smith is thankful for how far his business has come. “It took time and a lot of convincing, but now we’re in a very solid place. It takes time to gain real acceptance and develop credibility when you’re the new kid on the block. Without the incredible support that we’ve experienced, especially from models, we simply would not exist.”